This year marked my third running of the Cherry Blossom Ten Miler, the annual “rite of spring” about which I regularly kvetch. Too crowded. Too many big-butt ladies lined up at the front of the faster corrals and walking out of the gate (Please tell me, seriously, what good does it do you to LIE LIKE A RUG on the entry form about your expected finish time???). No sign of the supposed stars of the event, the cherry blossoms.

Well I’m not kvetching this year. Yes, I did see someone cheat and not run all of the way to a turnaround point. Yes, the course was altered due to investigation into a traffic accident. Yes, there were still big-butt ladies where they didn’t belong. But this year, we got the cherry blossoms and that changed everything for the better. I was completely seduced by the delicate, sunlight dappled blooms surrounding the Washington Monument. Look at the picture and tell me that isn’t serene. I would gladly run five lousy Cherry Blossoms to get one as nice as the 2015 race. The loveliness of the day put me in a stellar mood and that too made all the difference.

After running the Hashawha Hills 50k at the end of February and two marathons in March, my legs were kind of dead, so I haven’t been running much. Thus, my expectations for my Cherry Blossom performance were low — I just wanted to beat my boss (otherwise life would cease to be worth living — his heckling isn’t good-natured) and keep my time under 90 minutes. I started out fast, hoping to avoid having to do too much weaving through the crowd (I never thought I would say this about a race, but Cherry Blossom really does need more corrals since the pace disparity within each wave is too much) and when I did one of my regular, “how are you feeling” checks around the two-mile point I realized that I was feeling great and could keep pushing the pace. When I wasn’t hemmed in by too much human traffic, I was practically bounding over the course with big, bouncy, joyful strides. When I’m feeling it, I’m feeling it! I’d promised myself to not check my watch during the race so I’d focus on enjoying it rather than hitting a time goal, so I stuck to that and just ran by feel. I was surprised at the finish that I managed 1:17:50 — slightly better than my previous 10-miler PR, which I ran at Cherry Blossom in 2014. I basically accomplished my new record by accident.

With one caveat: the course may have been short. My GPS watch didn’t read short; I think it even came up long since I had to weave and pass people for the duration of the race. However, the traffic accident I referenced earlier caused a last-minute course change (We may have skipped an entire bridge? I never look at course maps very carefully; one of my friends noted that change to me, saying that the course was likely 0.25-0.5 miles off.) and the time between the mile six and mile seven signs seemed suspiciously short. I’ll wait until I hear something official about the change. Either way, I wasn’t looking to run a PR so I’m not going to get my knickers in a twist if the course was in fact short. I had fun and I’m pleased with my performance and that’s what matters. Also, I think I look pretty majestic in this picture. PROOF shot with scrolling text all over it or it didn’t happen, amirite?

After the race I went out for Mexican food with a friend and some of her friends. Feast your eyes on the beauty of the breakfast burrito I basically inhaled. It was good as it looked!

One of the women I was with is local-elite level — she recently ran a marathon in 3:18 and was disappointed by her time. She was so jazzed about running that I found myself getting motivated too. I might look for some summer races or more races for this fall since I’ve only got two left on my entire 2015 calendar.

The husband of another woman who came to breakfast with the group came with his fancy DSLR camera and made the mistake of dressing in a neon yellow jacket…just like the Marathonfoto photogs! Runners were coming up to him and posing, so of course rather than explaining that he wasn’t shooting the race in any official capacity, he just took their pictures. Naturally we gave him blue hell about it. He took a couple pictures with me in them after the finish, so I may be able to post one when they get passed around.

Also of note: I’d pre-ordered the Saucony Kinvara 6 and my pair arrived yesterday. 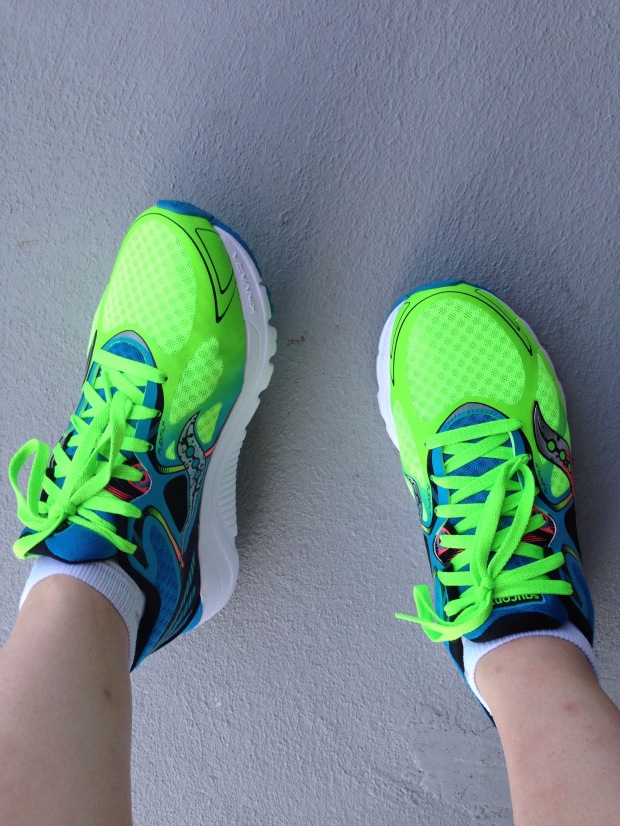 Initial impressions without having run in them:

They look sick. Big win for me on the blue/slime green men’s colorway. This is a shallow observation, but I know myself well enough to acknowledge that I won’t run in a shoe if I hate how it looks, even if it’s a great fit for my feet and gait.
Fit is hugely improved over the Kinvara 5 — actually felt lockdown. Hallelujah!
The heel isn’t sloppy. Quick visual comparison revealed that the heel is much narrower in the Kinvara 6 than the Kinvara 5 so heel slippage should be less of an issue.

I missed the fast feel of the Kinvara 3 and 4 in the 5. The construction of the 6’s upper is still more like a regular trainer than a hybrid trainer-racer/light trainer, but it seems to be going back more to its roots. I feel like the Kinvara crowd isn’t hoping to get a tradtional, plush trainer-like upper with the shoe so the move to the beefier tongue and collar between versions 4 and 5 still puzzles me, but 6 seems to have struck a better balance. Once I get some runs in the shoe I’ll have a more informed opinion. I’m keen to do a comparison review of the Kinvara 3, 4, and 5 since I still have each, but that would require a lot of refresher runs in the older iterations. We’ll see!