I promised myself after the 2013 Rock ‘n Roll USA Half Marathon that I’d never again run a Rock ‘n Roll race in DC. It’s pretty much the grimiest, most corporate race series around, not to mention too crowded and understaffed.

Fast forward to late 2014. I’ve just finished the JFK 50 Miler (Do I think running a 50 miler makes me special? I’d love to say no, but the distance magnets on the back of my car would probably give me away.) and in a rush of good feeling (RUNNING IS AWESOME, MUST RUN ALL THE RACES!) I signed up for the 2015 Rock ‘n Roll USA Marathon. So here we are again. Below is a frankly pretty lousy snapshot of some of the gear I’ll be wearing or leaving in my car tomorrow. (I don’t think you need to see my underwear, we’re not that close yet, Internet.) 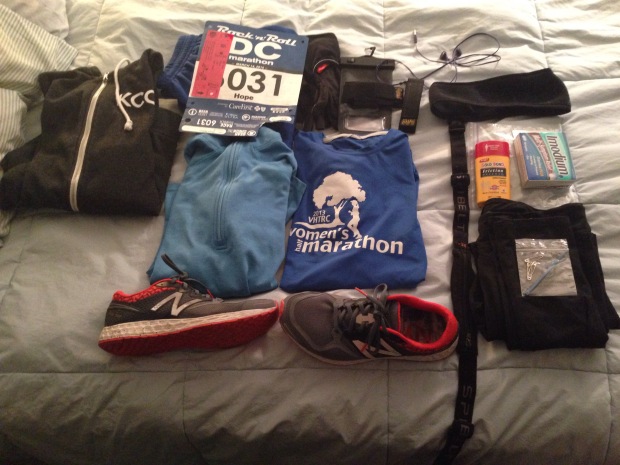 The waterproof phone arm band setup is pretty unique, as is my preference for Gold Bond Friction Defense over BodyGlide (that stuff is so sticky and so expensive — not everything sold at running specialty stores is better!), so I might post more in-depth about those at some point, but now I just need to hop in bed since I’ve got an early start tomorrow. Oh how I long for low-key races!